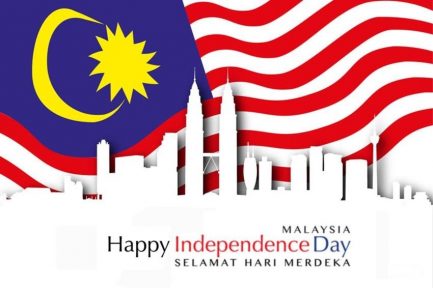 The Malaysia’s Independence Day is celebrated on 31 August. Also known as Merdeka Day (Freedom Day), this is Malaysia’s National Day.

The day commemorates the independence of the Federation of Malaya from British colonial rule in 1957.

Malaysia was formed in 1963 when the former British colony of Singapore and the East Malaysian states of Sabah and Sarawak, joined the Federation of Malaya. This event is marked by Malaysia Day. Singapore left the federation in August 1965.

Malaysia’s Independence Day is celebrated with much pomp and pageantry, signifying the unity of Malaysians of all races and creeds.

Towns and cities throughout the country are decorated with flags and shimmering lights.

The celebration centres on Merdeka Square in the morning, the starting point of a spectacular parade. His Majesty, the King, and government leaders sit among the thousands of spectators.

In a spirit of patriotism, office buildings, homes, and even vehicles proudly display the Malaysian flag.

Other activities held during this period include stage shows, competitions, and exhibitions.

We wish all Malaysian’s Independence Day –Today, we join hand in hand, Brave Malaysians all, By Uniting We Stand, By Dividing We Fall,

Where Can You Buy Table Legs

Where Can You Buy Table Legs? Most of the people love to mix and match…

Decon Products
Recent News
On Sale Now!
Growing Changing and Innovating. Those are the qualities that have distinguished DECON as Fast Growing Furniture Industry and much loved furniture brand, rooted in a rich history and grounded in the belief that quality and value never go out of style. DECON is a Brand that continues to lead the industry in today’s home, office,hotels,beaches and private villas…
Enquiry Now

By subscribing to our mailing list you will always be update with the latest news from us.

Connect with us
Visit our Showroom

Back To Top
Search